First things first. State machines are awesome, be it any part of technology you use them in.

Recently at work, we passed many pipelines on migrating a very large Rails app from Rails 4 to Rails 5. One of the major parts of this change was shifting from state_machine to aasm for our state transitions. We rely heavily on state machines for how our instances shift states. Much of our tasks associated with the models too are integrated with the after/before actions of our state machines. 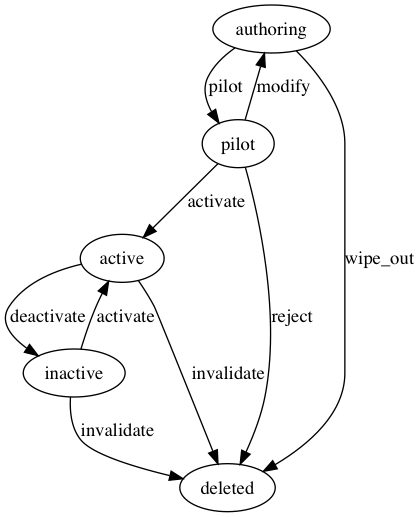 One and only one reason, state_machine has been dead, and for quite some time. We shifted from Rails 3.2 to Rails 4.2 last year, and since it was a really, really painful migration, we fixed our focus on changed syntax and ActiveJob, found the much famous monkeypatch for Rails 4.2 and stayed happy for the time being with state_machine. Though there is state_machines_activerecord, we wanted to move to a more reliable and tested library, and as we already use acts_as_state_machine or aasm in one of our other projects, we tried and gave it a shot, when we began our Rails 5 voyage, for which of course neither state_machine and its patch worked, nor it was recommended.

As it turned out, the process was not too messy. After a small study of the way both state_machine and aasm handle state transitions, one can easily find an analogy. Here are a few things which usually are a part of a state_machine laden project and how they should be modified to work with aasm

Goes without saying, remove from your Gemfile/gems.rb :

Yes, get rid of this if you have it, most probably in one of your config/initializers.

This is the major part of the change and yet the easiest to implement. This includes code change in models. Take a look at the documentation over at aasm and start changing the code. Here are a few pointers.

add include AASM to your model

Initiate your state machine block by listing out all your states. The common way is using one line to specify your initial state, and a second line to list all your non-initial states

Convert your events. All event blocks of the form transition :a => :b will be replaced by transitions from: :a, to: :b

However, in case of callbacks on a part of a transitions defined inside an event, one needs to define the transitions separately

if and unless guard blocks on transitions work the same way as in state_machine, and can also be substituted with a guard clause. The guards as well as callbacks can take arguments, lambda as well as Proc, same as the state machine guards

Yes, that’s it for the models. You can take a detailed look at the docs if you have more complex needs.

One plus point for state_machine , it has/had a variety of useful helpers for making use of states and events in views and controllers. aasm, though lagging behind a little in this domain, still has a good pool of helpers, both class and instance to make good use of. Here are some pointers.

Another great point in favor of state_machine is its state_event attribute over the instance. For eg.

On another note, the not-so-good-looking with_state / with_states scope methods of state_machine can be replaced by the enum equivalent syntax of aasm . For eg.

gets replaced by a much cleaner :

So yes, a couple of tweaks here and there, and a good pool of existing test cases which run green, you are done and production ready. This will get you started, but do back yourself up with the aasm docs.

Akash Srivastava
Akash Srivastava is a member of Technology at eLitmus. He is passionate about anything remotely related to movies when sane, and resorts to competitive coding and writing blogs when sleepless.